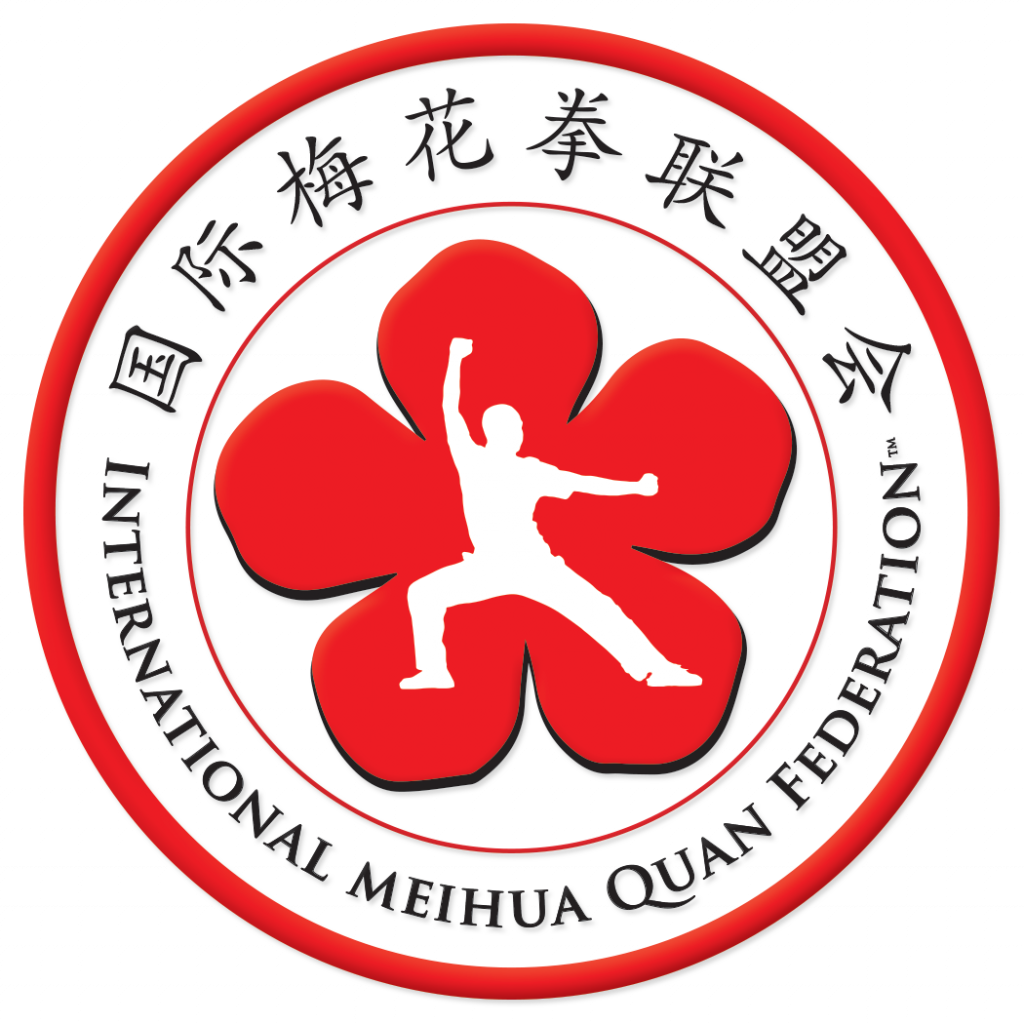 Tracing the Roots of PlumBlossom Boxing

Register as a member

First records for Meihua Quan appear in Liezi (列子), the chapter Tang Wen (湯問, The Questions of Tang), and “Historical Records: Zhao Shijia”. Liezi is a Taoist book written by the philosopher Lie Yokou that belonged to “Hundred Schools of Thought” around the 5th century B.C. In the Western Zhou Dynasty (11th century BC to 771 BC), general Zao Fu helped the king Mu of Zhou pacify the world after learning civil and military skills from the Taidou family. He was called the invincible chariot. Since that time, the imperial families regarded martial arts as the loyal secret law of the royal government. Later, general Zao Fu was granted the title of Zhao Cheng and became the ancestor of the family name Zhao around 1000 B.C. The skills learned by Zao Fu are the source of the primary practice method of Meihua Quan: “Gan Zhi Wu Zhi Plum Blossom Pile.” Therefore, the Meihua Quan skills, based on historical records, have been practiced for more than 3000+ years.

Civil and martial arts were prevalent in the Zhou, Qin, and Han dynasties and reached their peak in the Tang and Song dynasties. After the emperor of the Song dynasty was captured by Kublai Khan, some civil and military ministers went north, while some civil and martial arts recluses took root in folk secrets. They handed down the arts until the end of the Ming Dynasty and the beginning of the Qing Dynasty. The original civil and martial arts that were not publicly passed on, after being systematically sorted out and perfected by Zou Hongyi, was named: Meihua Quan. Later disciples honored Zou Hongyi as “the ancestor of plum boxing”. According to historical records, Meihua Quan was not officially spread until Zou Hongyi. During the emperor Kangxi of the Qing Dynasty, Zou Hongyi practiced martial arts to perfection and achieved great fame. To push Meihua Quan into civil society, he left Xuzhou to settle in Kaizhou (Puyang, Henan Province) with his disciples Cai Guangrui, Wang Xinzheng, and Meng Youde. After completing the learning, the disciples traveled to different areas to teach and spread the style.

After receiving Han Huali and Sun Panlojng as disciples in Kaizhou, Cai Guangrui traveled north. He settled in Pingxiang county in Pingyi and Ma Zhuang (Hou Mazhuang village). While passing through Neihuang county, he accepted Yang Bing in Balizhuang as a disciple (later Wu Tanhua in 1712 of Emperor Kangxi). In Shunde, he accepted Zhang Fu as a disciple. He taught martial arts in Mazhuang Qiao, and later, he received Li Jinde, Xu Jinde, and Zhang Yude as disciples.

In 1705, Cai Guangrui sent Li, Xu, and Zheng to Henan to welcome Zou Hongyi master. The “Three Virtues invited teacher” has been spread as a story in the martial arts circle. Zou Hongyi was invited to Mazhuang and settled down there. He opened a martial arts court to recruit and teach disciples. At one time, there were more than 100 disciples. Because the skills of Zou Hongyi were extraordinarily high and exquisite, Meihua Quan spread quickly.

The Meihua Zhuang (梅花桩, “pillars of the plum blossom”), short for Ganzhi Wushi Meihua Zhuang (干支五式梅花桩, “trunks, branches and 5 forms on pillars of Plum Blossom”) is also known as Meihua Quan. The style originates from the Kunlun monks and is considered both as an internal and external style. The foundation of the style is also correlated to the mythological figure Yun Pan.

Over a long time it passed only through the male line therefore it received the name of “fuziquan” (父子券) – fist of father and son. Although this style is known from ancient times, it spread widely only at the end of the Ming, and the beginning of the Qing dynasties, in Hebei, Henan, Shandong, and Shanxi provinces. 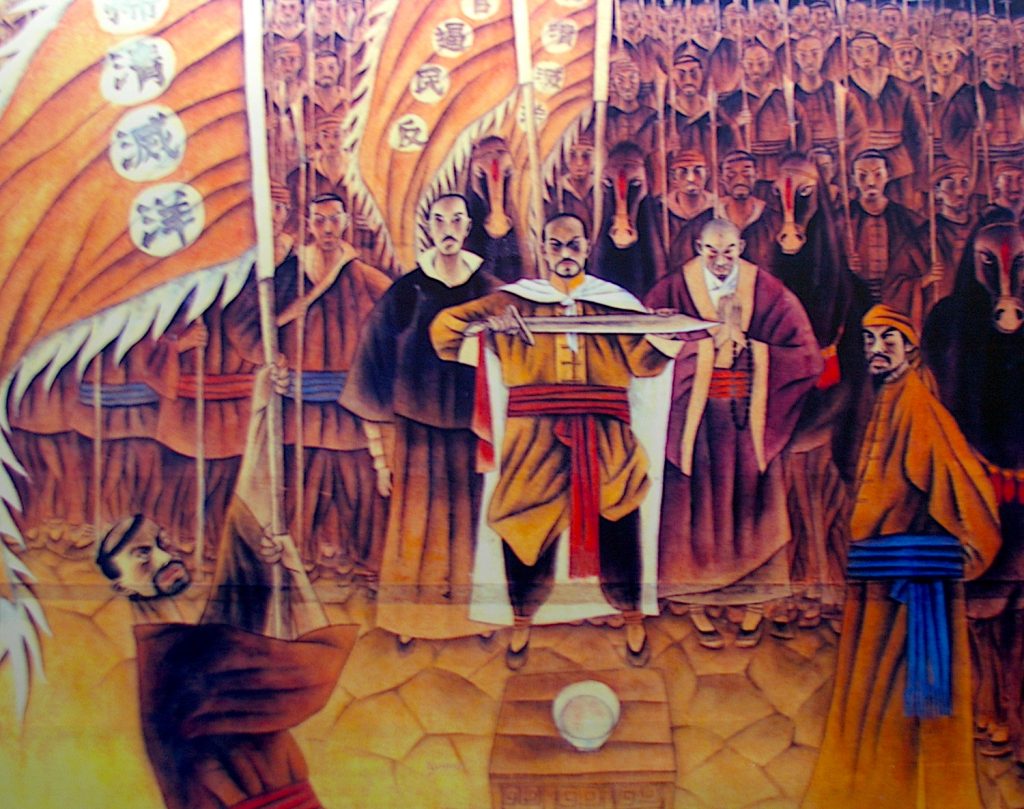 The highest level of Meihua Quan

Villagers often say that the Meihua Zhuang existed “since the beginning” but the oldest written records date from 1588, in the period of the 2nd Generation Successor Master Zhang Sansheng (张三省). In Xuzhou, Jiangsu province, Master Zhang started his studies of Meihua Zhuang. Zou Hongyi (邹宏义), the disciple of the Master Zhang, become the 3rd Generation Successor. He was born at the end of the Ming Dynasty and during the Qing Dynasty he moved to Hebei, in Pingxiang county, the village of Mazhuangqio. During the period of the Masters Zou Wenjiu (邹文鬏) and Zou Wenrei (邹文瑞) – both 4th Generation Successors – appeared evidence of the Meihua Zhuang organization in Hebei province. Mazhuangqio plays an important role in the Wenchang (文昌) – civil arts and meditation – and Wuchang (武昌) – martial arts. The master Cui Guangrei (催关瑞) which is also a 4th Generation Successor, settled in Hebei province, Guangzhong county, Qianwei village. In the memory of this master which dedicated his life teaching Meihua Quan was erected a commemorative monument in 2001. 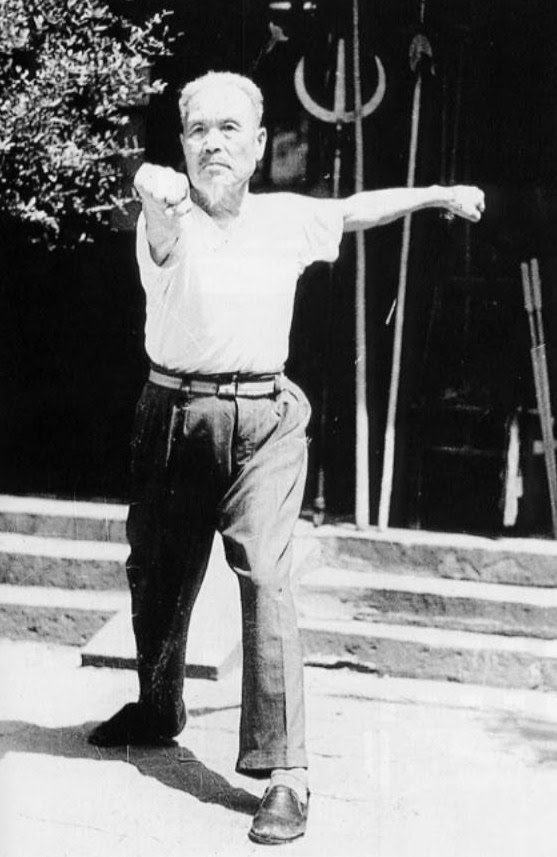 The legends of Meihua Quan

Standing on the shoulders of giants

In 1742, Master Yangbing (杨兵), 5th Generation Successor, wrote a treatise on Xiwuxu. He was the keeper of king Kangxi.

The Master of 8th Generation Successor Zhang Congfu (张聪富), taught wugong (武功, martial arts) with the purpose to help his students to reach enlightenment and wenli (文理, meditation and theory) with the purpose of understanding the laws of nature to improve health and achieve longevity. He changed the exercises patterns from Dajia (大架) – large Jiazi (架子) exercise patterns to Xiaojia (小架) – small Jiazi (架子) exercise patterns. The change had as purpose to accurately reflect the guiding principles and the spirit of the wenli.

There are many legends about the accomplishments and the exploits of the Meihua Zhuang masters. The legend say that the Master Wu Qingchang (武庆昌) – 9th Generation Successor from the Dongzhao village in Guangzhong has been attacked while passing on a narrow alley. He demonstrated his extraordinary martial arts skill by defending himself. When he passed away more than 10 000 people went to his tomb to honour his life accomplishments.

In the village of Wangjiazhuang in Wuqiang county, Hebei province, in Guandimian Temple had settled Tingji Li, from the village of Qujiazhuang in Wei county. Tingji Li, who practiced Meihua Zhuang, also led the villagers. He was a pupil of Ren Junjie who also studies with Li Tinggui, brother of Li Tiangji. Ren Junjie taught to turn to Mochi Yin and Zhao Yinlian, which had as disciple Han Qichang (韩其昌). The latter introduced Meihua Zhuang in Beijing where he taught especially his son Han Jianzhong (韩建中) and his grandson Han Chao (韩超).

The Meihua Quan played a significant role during the Boxer Rebellion (1898-1901). The boxer rebellion was initiated by the students of Meihua Quan fighting against the eight nations’ allied forces to promote the pace for establishing the People’s Republic of China. Feng Keshan, a leader of BaGuajiao (Society of 8 Trigrams) and Zhao Sanduo, leader of Yihetuan (Group of Justice and Unity), were masters of Meihua Quan. The style, which had been renamed for political reasons Yihe Quan (“Fist of justice and unity”) paid dearly for the involvement in the rebellion and the blackout on martial arts set up by the following government, being pushed in almost underground until 1987. 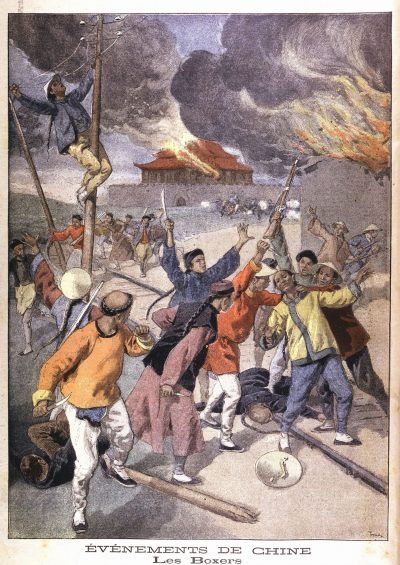 In 1955, the German Chancellor Grottiz visited China and personally handed a boxer flag to Chairmain Zhou Enlai. It is a high recognition of the historical achievements of the Boxer Patriotic struggle against imperialism. The Chairman said: “The Boxer Rebellion of 1900 was a manifestation of the Chinese people’s tenacious resistance to imperialist aggression. Their heroic struggle is one of the cornerstones of the great victory of the Chinese people 50 years later.” 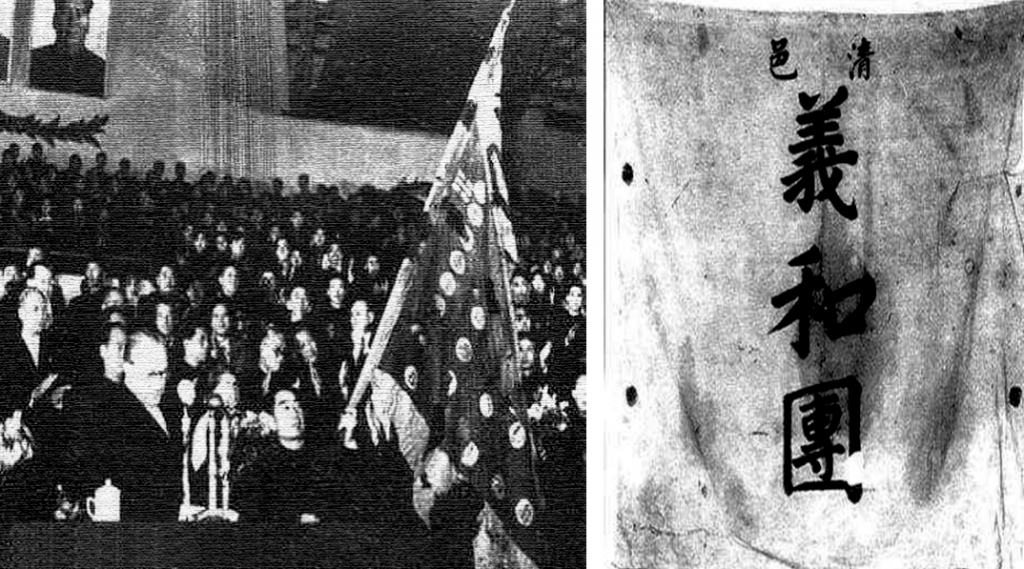 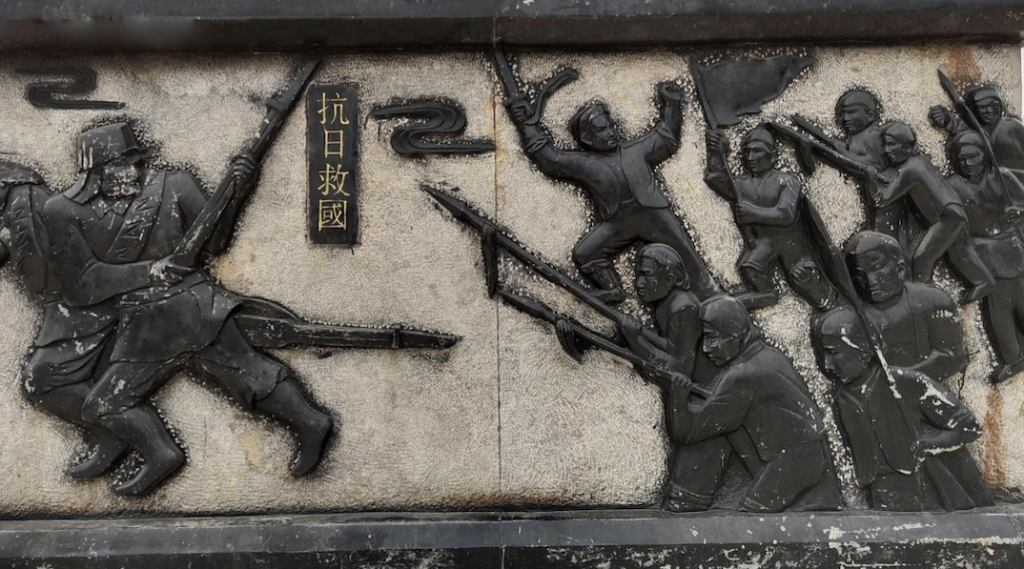 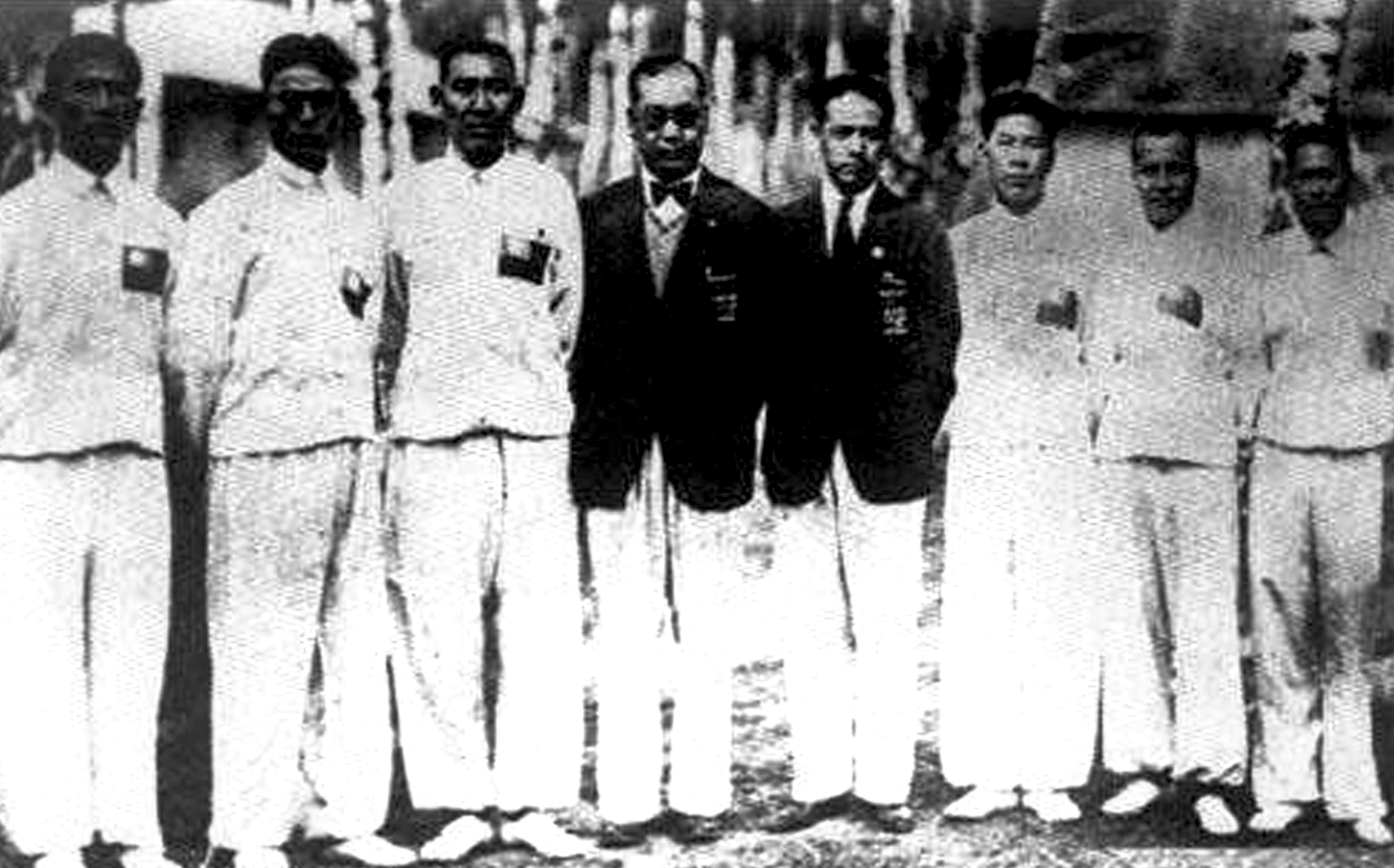 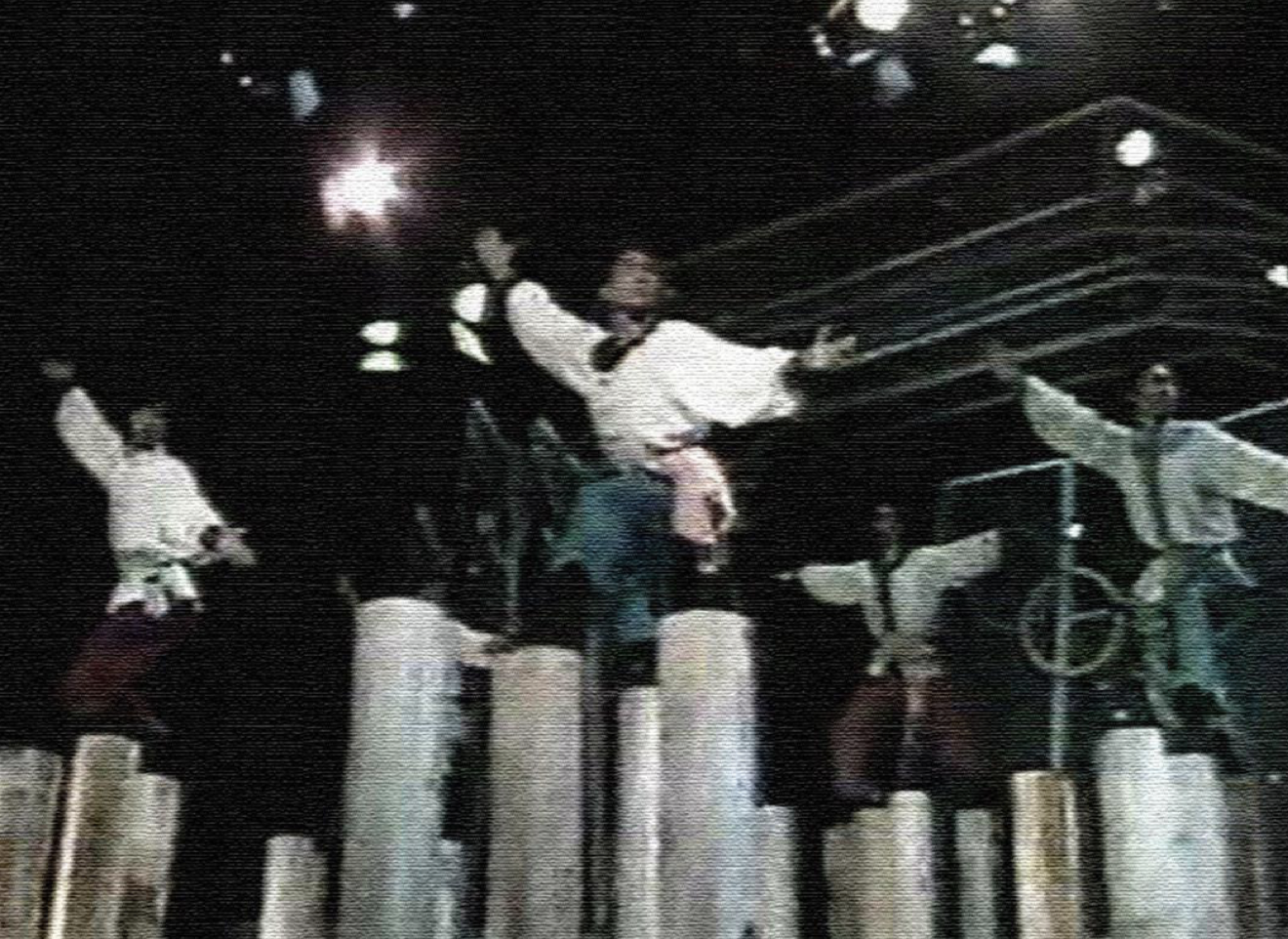 Meihua Quan is widely spread in North China and is a unique and excellent boxing style in traditional Chinese martial arts culture. It still retains its traditional essence and original inheritance form. On May 20, 2006, Meihua Quan was included in the first batch of the National Intangible Cultural Heritage List by the State Council of the People’s Republic of China. Zhang Xiling was approved by the State Council and named by the Ministry of Culture as “the representative inheritor of Xingtai Meihua Quan, a National Intangible Cultural Heritage.” 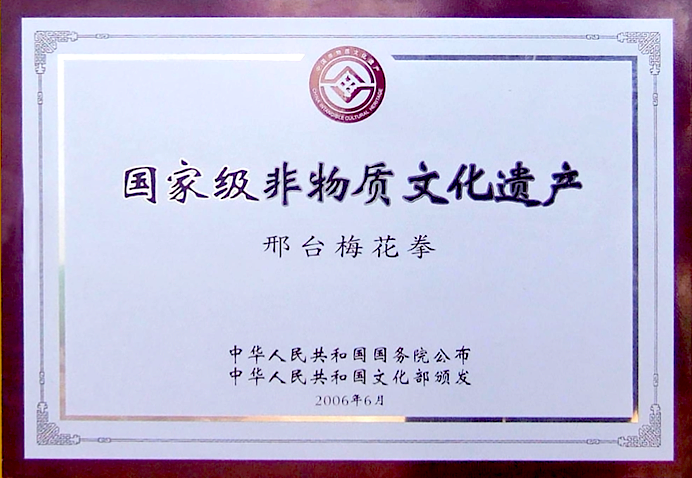 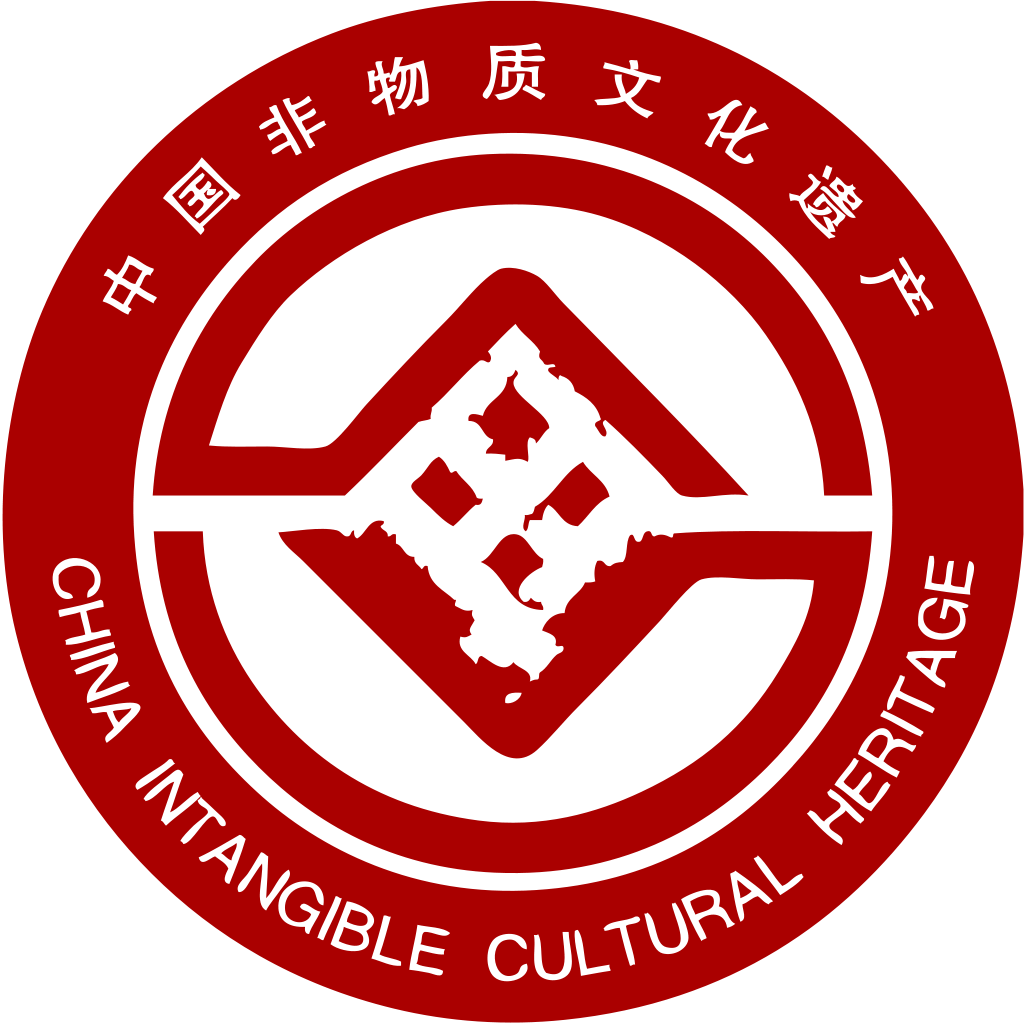 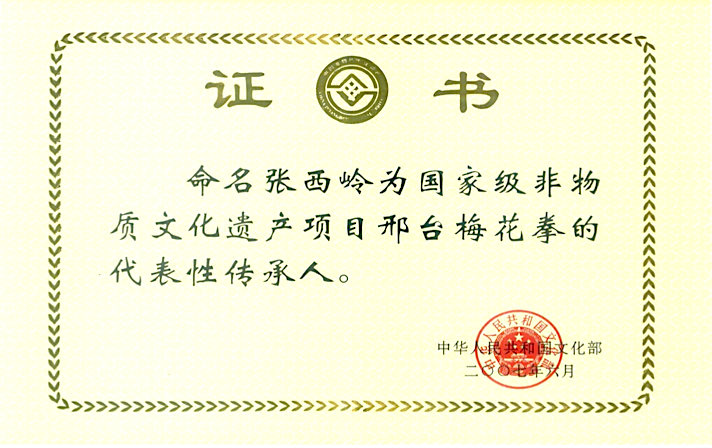 Every year on the 16th day of the first lunar month, a grand event is held in the square in front of the ancestor’s tomb in Hou Mazhuang, Pingxiang, Hebei Province, the birthplace of Meihua Quan. Meihua Quan is rooted in Pingxiang and blossoms everywhere. The successors and disciples of Meihua Quan have spread all over China and more than 50 countries and regions in Asia, Europe, America, and Africa.